But Who's Keeping Score?

I've come to the conclusion (the very grown-up conclusion) that I may play a large part in my weekly disasters some might refer to as dates.  Perhaps I give off the wrong vibe on a date...?  I was recently speaking with a friend of mine who said she went on a few dates and decided to choose "Mr. Friday Night" in lieu of "Mr. Saturday or Wednesday Night."  Hold up - she decided?  What, they all loved her so much that she just got to choose?  Moreover, all of her weekly flavors were actually relationship-worthy?
Second grown-up conclusion; my friend must be giving it up on the first date.
So back to my ill-cast vibe – I believe what it boils down to is that dating is just so....what's the word I'm looking for here?  Exhausting.  And not “cute exhausting”, like an IRS tax audit.  I'm talking an all-consuming, emotionally draining, affects-every-fiber-of-my-being, kind of exhausting.
For example: Bi-weekly pedicures, bi-weekly eyebrow wax, (and let's face it, those should be weekly) daily shaving of the legs, haircut and color every 4 - 6 weeks, purchasing endless seasonal variations of "the perfect outfit" to wear, overwhelming guilt after partaking in guacamole and a beer, (and I love my beer!) always having to be on my best behavior, editing and over-thinking every text response, monitoring my every word, running every day, arms and back on Mondays and Wednesdays, legs and shoulders on Tuesdays and Thursdays, vigilant plucking of the chin hairs, keeping Crest Whitestrips stock prices at an all-time high...So yeah, if I’m on a date with you and I’m not projecting the right “vibe”, it’s probably because I’m worn the eff out!
Someone (a lot of people) once (continually) suggested that I'm too particular and should be more open-minded when it comes to men.  Listed below is my “man” wish list. (right, like I'm the only one who has one of these stuck on my fridge)
Too much to ask for?  I'm gonna’ go with no.  But I did agree to try the open-minded route.
Enter Secret Service Guy #2 - we'll call him "Brad."
Brad was another dating site glory who captured my attention with his metaphorical "balls" and avid tenacity.  I had originally closed him out, meaning, I looked over his profile and didn't see what I was looking for, so I "closed communication" with him.  Typically, when this happens, I don't hear from the person again.  But Brad emailed me and said, "I noticed you decided to close communication with me.  I would like for you to reconsider as I think I have a lot to offer and we have much in common."  That took guts and I admired that - a lot!  So, I opened up the lines of communication with Brad, and opened my mind as well.
A little background about Brad - he was in the process of moving to Dallas, but hadn't done so just yet.  He actually had several ports around the country that he called home due to work travels, and was very much looking forward to having just one place to lay his head.

Apparently his head wasn't only thing he was "laying" in these various ports...

Karen - So, are you excited to move back?

Brad -  I am - it's been a long time coming.  My girlfriend in Austin isn't very excited, but she understands it's what I need to do.  She's just unable to move back with me right now since she's getting her PhD.

Karen - Huh.  So tell me about your job.

Brad - Well, I was doing a lot of traveling with my various assignments for work, but now I'll just be working a desk job.  It's kind of ironic because my girlfriend in Maine is this spoiled 25 year old socialite who can't handle my traveling.  Now my traveling is coming to an end, but she can't move back with me since she's set to take over her family's multi-million dollar business.

Karen - Sounds to me like you've got a lot of girlfriends.  Are you still dating these women?
Brad -  Well, I don't actually move for another 3 months.  So, yeah.  But once I move I'm looking to be a one-woman man.
At this point, I'm in such disbelief that my mind is unable to regroup and negotiate my next move. On the one hand, I'm completely offended that he would be so blatant about his other girlfriends.  On the other hand, the fact that he was so blatant about his other girlfriends was sort of....a turn on. (yes, a most telling peek into my psyche that screams "The answer as to why you're still single lies right freaking here!", I'm aware)
Long story short, I accepted a date with Brad that weekend. (cue the collective cry of disapproval) Hey, I was keeping an open mind, remember people?  Apparently, however, the fact that I wouldn't go up to his hotel room after the date was a bit of a deal breaker for him.  Not surprisingly, I didn't hear from Brad after that night.
Well, not until 7 months later, anyway... 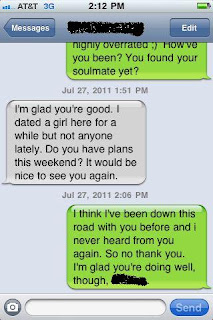