Remember how I was talking about Pinterest getting the best of me – suggesting that my life needed a facelift of sorts? Remember the other post about not having any self-control, which is why I have 3 dogs instead of, well, none?  Remember the other post where I jumped up and down naked, awestruck by my fat’s blatant disregard for solidity?

Life facelift, no self-control, fat that’s taken on a life of its own = drastic measures.  Drastic Measures = Insanity.  Yes, that one.   P90X’s answer to, “Let’s see if we can actually kill some people.”  In a weak moment in the nocturnal suspension of reality (read, watching infomercials at 2am), I succumbed to the hype.

The ripped, unpaid spokesperson was staring deep into my insomnia-laden eyes, promising me the body from my 20’s if I'd just do the work.  Sixty days - a year’s worth of results in just 60 days.  That doesn't look so hard, I thought to myself as I lie all sloth-like on the couch.  The only muscles I used during the hour and a half infomercial were those that aided in scraping the bottom of my Ben and Jerry’s container.  But yeah, I'm all over this.

The real kicker, though?  The part that got me to hop online and order the program?  The t-shirt.  That’s right – a t-shirt with the word, “Insanity” chiseled across the front.  You see, you can’t just go buy this shirt.  You have to earn it by completing the program.  Lesson #1 - Don’t threaten me with a challenge.  I will cut off my nose to spite my face and pay you a handsome sum to prove you wrong.

The next morning, however, I immediately regreted my decision.  Buyer's remorse?  Or panic – it felt more like panic.

Panic because the Insanity workout is aptly named and I'm known around these parts for biting off a smidge more than I can chew (3 dogs, anyone?).  But also panic because of this highly coveted t-shirt.  This $149.00 t-shirt.  To earn the shirt, you have to take before and after pictures and send them in to the Insanity people.  I guess then they determine whether or not you actually did the program based on your results, and then send you a shirt if you look good enough.  Before pictures?  Someone has to see my "before"?  My boyfriend has to see my "before"?

People, I do my best to protect my younger boyfriend from things he just shouldn't see; dim lighting, lots of covers and swift movements to make me blurry - all in my bag of tricks.  But in order to have before pictures, you have to show the "before."  The un-pretty, un-taut, un-sucked in, unbelievably gross parts - just hanging there, being all before-like.

While I've blocked most of the traumatizing photo-shoot from my memory, I do remember apologizing - a lot.  I'm considering a small offering of gratitude.....like a car.


Well, the box finally arrived Monday and there was nothing left to do but the doin’!  I hung the Insanity progress poster on my bedroom wall, grabbed a large bottle of water, gave myself one last pep-talk, and popped in the DVD. 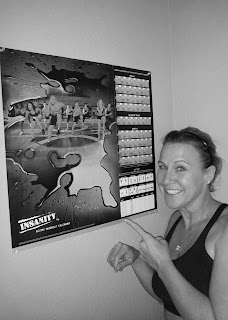 I was exactly 11 seconds of high knees in when I checked the screen timer to see when this fresh hell would be over…my breathing was erratic, my heart monitor was smoking and shooting sparks and I could actually taste the lactic acid burning my throat.  Plus...I really wanted a sandwich.