Ma'am, Could You Grab My Breast? It's Floating Behind You...


In the 7th grade, I wanted to look just like Phoebe Cates.  Don't worry about the fact that she has olive skin and I'm a light off-white.  Never mind her dark, flowing locks, for I took the road less traveled with an irresponsible, flat-feathered style.  Look away from her flawless physique and rather focus on my rugged, block shape, supported (defying all laws of physics) by my long, twiggy legs.

Those paltry differences aside, we were twins.  TWINS, I tell you.

Like most 7th graders, I was an insecure ball of hormones desperate for people to like me.  Now, when I say "people," I really mean boys.  I was a hot little number with Buster Brown shoes, oily skin, and a double chin.  It was a far stretch to think that anyone the likes of Chris Collins - the cutest boy in school - would ever look my way...

...until one day, he and his crew were walking right toward me.

They'd been making the rounds in school that day, looking at girls and assigning them a number.  Some of the numbers I overheard were 7, 10, 12 & 6.  I had no idea what the numbers signified, but the higher numbers seemed to garner more excitement from the group than the lower numbers did.  As they approached me, I was nervous and excited all at the same time.  What was my number going to be?

I didn't have to wait long - "K," shouted one of the boys.  After a brief pause - as if to compute what "K" meant - the group erupted with laughter.  Hands over mouths, the slapping of knees, one kid fell to the floor in a fit of hysterics, and high fives all around.

Now, I was having a pretty good hair day that day - my Dorothy Hamill was helmet-perfect - so I decided to hold my head high and confidently make my way to Home-Ec.  But I was dying to know what was so funny.  What did "K" mean?

K!?  Kindergarten!?  Friends, not even Judy Blume could have prepared me for this...

Who knew that an adorable childhood game like Grade The Rack would spark a 3 year obsession with my non-existent boobage.  How many cars would I have to wash before I could afford a boob job?  How can I make them bigger? When is this elusive puberty going to grace me with unsightly pit hair, body odor and, above all else, breasts?

I prayed every night for boobs, but God either didn't hear me or was on vacation, because my boobs weren't growing.  It was time to take matters into my own hands.

Once the lady at Sears dried her tears and stopped laughing, she was actually quite helpful in finding a AAA padded bra to fit my not-yet blossoming bosom. I couldn't wait to wear my new boobs to school the next day.  That is until Jason Smith questioned my overnight sproutage and poked at my right boob to confirm his suspicions.  Sadly, the bra cup, supported by nothing but air, collapsed against the tremendous pressure of Jason's test poke and remained in the concave position.

Again, I decided to hold my head high - stick out my one, good boob - and proudly make my way down the hall.

Summers were the worst, though.  At least the winter offered the protection of layers.  Light fabrics that hugged the skin were not forgiving to the underdeveloped.  And the pool?  Well the pool presented challenges of a different kind.

Now that I think about it, I had some mad engineering skills back then.  I just didn't think things through to the end.  I mean, who wouldn't head to the pool after taking the time to strategically place carefully folded (and cut) Kleenex into the triangle lining of their bikini top?  Soft, supple, fool proof, right?  The moment I jumped into the water, the delicate tissue violently ejected from my bikini lining, leaving me shrouded in shredded Kleenex pieces.  I exited the pool looking like an underdeveloped spit ball.

Humiliating as that was, it didn't stop me from moving forward on my instantaneous puberty project.  That very night I had an ingenious idea - shoulder pads!  I decided shoulder pads would be a better, more structurally sound, choice.  Again, I carefully cut and placed the modified shoulder pads in my bikini top and waited for them to do their magic.

I gotta tell ya, this was working.  They were shapely, they were resilient, they were perky and they were turning heads.  What I hadn't counted on, however, was their tremendous buoyancy.  As my squat body plummeted to the bottom of the pool, those suckers shot to the surface faster than two tiny heat-seeking missiles.  So there I was, flat-chested at the bottom of the pool, just praying for the ability to breathe underwater.  But alas, I had to collect my breasts floating on the surface above.

Boobs...sometimes they just get away from you.

Just going out on a limb here, but I'm guessing Phoebe Cates never had to collect her boobs... 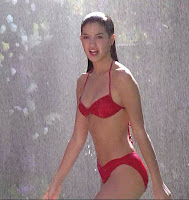